Deanland Airfield is very close to a designated Area of Outstanding Natural Beauty and the South Downs National Park: As such it is the intention of the Operators that the Airfield be a part of that Area, rather than an imposition upon it. Two separate, but complimentary, considerations must be acknowledged, in order to achieve that aim, namely, Physical Aspects and The Perceptions of the Local Community.

Within its' boundaries, the Airfield contains areas of woodland, natural-hedging and coarse meadowland. Generally, the land is maintained with the minimum use of pesticides, and other intrusive control-methods, although some light spraying may be used in order to keep the hay-crop clear of weeds, which might be harmful to livestock. The Operators have planted trees, placing emphasis upon those which would occur, naturally, in the English countryside; the growth of indigenous species such as Hawthorn/Blackthorn, Oak, Ash, Beech, Elm, etc. is encouraged.

The site is a haven for many species of insect - Bees, Butterflies and Dragonflies are particularly prolific - and we enjoy a good variety of bird-life; the resident Nightingale chorus, which serenades the area up to late May, has been described as the best for miles, and we have 'our own' Barn- and Tawny-Owls, Marsh-and Hen-Harriers, Swifts Swallows and Martins from late Spring, and - a 'first' in 2000 - a pair of Buzzard has been seen over the Eastern Meadow. Of note is the fact that the hay is never cropped until ground-nesting birds have completed their fledging-cycle, and we boast an excellent population of Skylarks, as a result.

The Mammal population is made up of many varieties of Mouse, though we have not spotted the rare Dormouse, as yet: Others include Stoat, Weasel, Badger, Shrew and Field-Vole and several varieties of Bat - mostly Pipistrelle. By far the largest contingent in the Mammalian camp is that of the Rabbit; these animals cause a certain amount of damage at the Airfield, but they invade surrounding crop-growing fields to a considerable extent. They are controlled naturally, in part, by the local Fox population, but they are controlled by shooting if numbers appear to be getting too high - this only takes place when there is no significant human activity at Deanland.

The Perceptions of the Local Community

Deanland has been an active airfield since WWII and operates under a 'Certificate of Lawful Use' it is our policy to listen to our neighbours acting upon local feedback, if at all possible. Indeed to protect the airfields long term future in 1993 we entered an agreement with a neighbour and the local authority not to allow flex-wing micro lights to use the airfield.

In this context, it is recognised that individuals within any cross-section of the population may object to Light Aviation generally, and would like to see it banned - the Ripe area is no exception. In order to maintain some balance in such matters, and to be seen to be maintaining that balance, the Operators communicate with the Ripe Parish Council, ESCC and local property owners in a consistently open manner. We have made an important contribution to local issues, such as Land-Raise, and the Sussex Police / Air Ambulance Helicopter has made use of the Airfield in the pursuit of its' various tasks - another useful contribution to the Social Fabric of this part of East Sussex.

Since the 1960's Deanland has hosted regular 'Fly-Ins' and 'BBQ's' with aircraft invited for all over the UK and abroad. These events are held to raise money for charities, two of which are the WWFN and RAFA. Microlight training has been carried out from Deanland since 2000, firstly by Southern Light Flyers and currently by Flight Sport Aviation many local people have learnt to fly from Deanland. Model flying has also taken place from Deanland since the 1960's, all model flying has been under the control of Eastbourne Model Flying Club.

The area between Hailsham and Lewes is subject to quite a lot of aviation activity. Many people do not realise there are small airstrips at Laughton (Kittyhawk), Hailsham (Westfield Farm, Boship & Horsebridge), Lewes (Swanborough), the closest of which operate under the '28 day' rule plus a very active gliding site at Ringmer. Low level military aircraft regularly use this part of Sussex. In addition to this the area is used by Shoreham based flying clubs for 'practise forced landings' and aerobatics. Deanland based aircraft are encouraged to spend as little time operating in this area as possible. NO AIRCRAFT FROM DEANLAND WILL EVER MAKE LOW PASSES OR CARRY OUT AEROBATICS IN THE LOCAL AREA, except on the occasional 'event day' and then any aerobatics will be centred on the airfield and for a very short period of time. It is not within our powers to 'police' the local skys (nor is it down to the Police or Wealden District Council, it is the domain of the Civil Aviation Authority), if you see an aircaft you wish to complain about get its registration number (they are by law large and can be read easily with the naked eye if the aircraft is below the legal height of 500 feet) and enter it in the CAA web site, with this you will get the name and address of the registered owner to whom the complaint could be made. Any further action would have to include the CAA.

All residents and visitors to Deanland must respect the environment by, for instance, removing waste from the site for appropriate disposal; wherever possible, the environment of the Airfield and the surrounding area should be enhanced.

All aviation activity to and from Deanland must be conducted in the most noise-sensitive manner possible. Compliance with all Noise Abatement Procedures is mandatory - failure by pilots to do so will result in their not being allowed to return or operate from Deanland! Full details of the procedures can be found on the 'Pilot Info' page and MUST be read, understood and complied with.

Deanland Airfields aim is to be part of the local community rather than an imposition upon it. In order to achieve this aim much effort has been put towards supporting local activities and charities. Deanland was a crucial part of the ‘stop the land raise’ campaigns, not only in making and funding its own detailed submissions but the fact as an airfield there were certain legal protections in place that made the proposed site at Veal’s Farm more problematic. The airfield being a designated ‘historic site’, due to its war time contribution, had the same effect.

Deanland has established links with local Scout, Air Scout groups in Hailsham & Ringmer, Eastbourne Army Reserve, Ringmer Astronomer's and is keen to develop such relationships further. Many young people have experienced their first flights in light aircraft as a result of support by our pilots of the ‘Young Eagle’ scheme.

Deanland has been used for many years by the Sussex Police helicopter and welcomes the Sussex Air Ambulance as and when the need arises. The airfield has also been used on a number of occasions by Sussex Police for specialist training; both the firearms and dog departments have made use of the facility. Microlight training has been taking place from Deanland since 2000 and the airfield has been a back drop to a number of TV shows and films.

Historically a proportion of visitors landing fees have been donated to charity and when special events are held further money is raised. Charities to have received donations form Deanland are WWF, and RAFA. Currently Deanland supports:

The airfield is also very keen to become involved with local schools and young peoples groups to promote knowledge of the important history of Deanland Airfield and introduce children and young people to aviation. During 2018 local groups will be contacted to organise airfield visits and talks. Microlight flying training has been carried out at Deanland since 2000 and many people from the local area have learnt to fly from Deanland in idyllic suroundings. Should you wish to discuss a project for your group please contact us.

To minimise noise issues locally Deanland operates very strict noise abatement procedures and takes decisive action against visitors to Deanland who do not conform to our rules. We have no legal power of any sort over the many aircraft operating in the area, however we are can signpost any one locally who feels an aircraft may have been flying illegally. NO AIRCRAFT FROM DEANLAND WILL EVER MAKE LOW PASSES OR CARRY OUT AEROBATICS IN THE LOCAL AREA, except on very occassional 'event days' as mentioned above. For more on aircraft noise or low flying go to our Enviromental Statement.

We are very proud that model flying, both power and gliding, has been carried out at Deanland for in excess of 41 years.

Only the long established Eastbourne Model Flying Club (EMFC) may use the site and all model flying is done under their auspices on specified days and times. 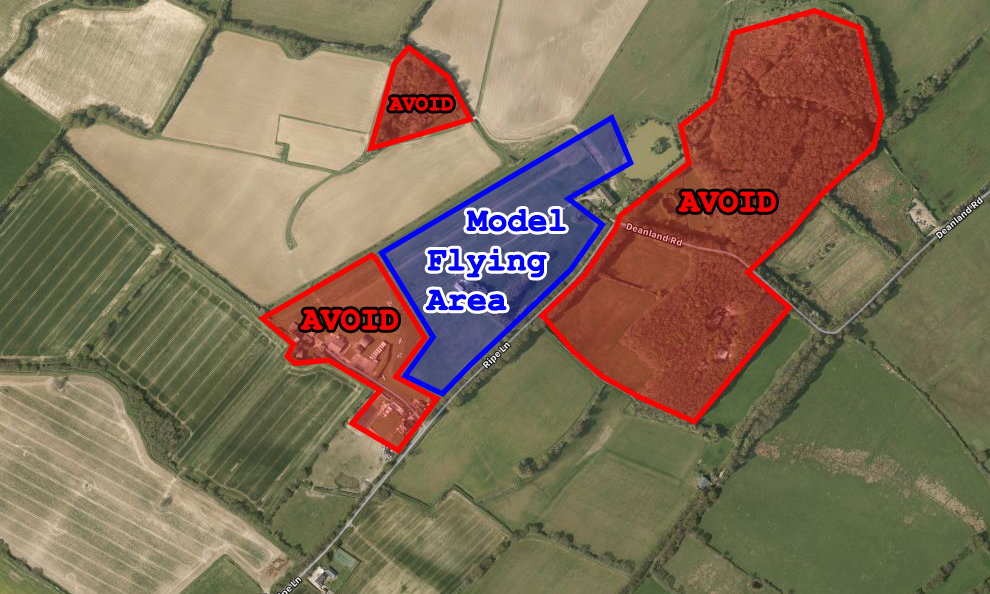 EMFC have laid down rules and procedures which must be complied with at all times. All people flying models must be fully insured. As suggested by the CAA under CAP658, Deanland Airfield LLP has determined a ‘designated flying area’ for models which can be seen on the chart above highlighted in Blue.

Full size aircraft have priority over models at all times and the model flyers are required to monitor the Deanland radio frequency when flying.

The woods and areas highlighted in Red must never be overflown.